“This is the 21st century. We shouldn’t have to fight the social battles of the 19th century again”

I write, sing and play guitar in three piece progressive-punk (or power-psych) band The Speed Of Sound which emerged from suspended animation and started playing live again in 2013 after a 20 year public performance gap. I have green eyes and often dress in black.

The most unusual gig I have ever played was a free improvisation on acoustic guitar to accompany a re-imagination of a pagan marriage ritual taking place inside Manchester City Art Galley in 1987, the officiating priest was artist Bruce Lacey (who was George Harrison’s gardener in the Beatles film ‘Help!’).

Waking up the morning after the election with combination of disbelief and anger at the arrogant smugness and selfishness that’s now apparently accepted as normal (and even desireable) character traits. The whole austerity thing is disgusting. This is the 21st century we should be looking outwards, living on the moon and Mars and working together not having to fight the social battles of the 19th century again. The ‘I’m alright sod you’ approach is not the way to develop as a species.

Foodbanks are not something to be proud of. There simply should be no need for this by now. The whole austerity thing is ideologically driven and completely senseless, the wider economy does not function like a personal spending budget; if people have money they spend it so by cutting employment and pay (and government spending) the economy contracts while the rich get richer. Its nauseous.

Simply put I needed an outlet for the frustration of effectively having to live through the 1980’s again. I co-host a radio show on ALLFM 96.9 and the first three records I played after the election were The Sex Pistols Silly Thing, Throwing Muses Furious and The Stranglers Something Better Change. It made me feel a little better… and then, I heard about We Shall Overcome weekend. It felt good to not be alone.

Music inspires and invigorates me and so do people. A half heard phrase from a passing stranger can be a spark. It’s good to know there are other people that also don’t feel the current government speaks for them, it might be five years before we get another chance to start again but we don’t have to spend that time being timid or miserable. We can turn our amplifiers up and roar.

The sense of unity of purpose is already there and can only grow between now and We Shall Overcome weekend. With four months still to go there is a feeling of community with the other performers/venues and that will also involve the audience too. An organic togetherness, not manufactured, its the complete antidote the the current state of commercial music and the mainstream BritainsGotTalent/xFactor celebrity garbage. We may well be shouting at politicians in a PR bubble insulated from real people and the mainstream news organisations may ignore us, but I don’t think this community will disappear after the weekend. Something is happening.

Find out more about The Speed of Sound 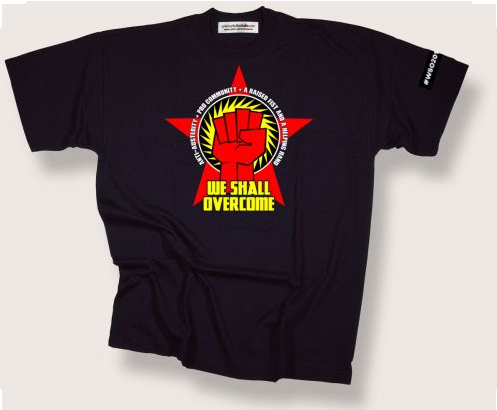