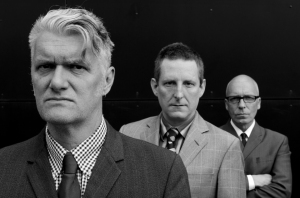 We talk to Dunstan Bruce of Interrobang?! who are playing with Thee Faction at the Pipeline in London Friday 2nd October and again at Le Pub in Newport on Saturday 3rd October.

For 23 years I was a member of Chumbawamba. I left in 2005 and got involved in making documentaries instead. I set up a very small production company, Dandy Films, with my partner, the documentary maker, Daisy Asquith. Interrobang?! has been in existence for about 18 months or so; it’s me and Harry, also once of Chumbawamba and Griff who was guitarist in Regular Fries. We are just about to release our second single. We’re recording an album. We mean it, man!

What made you want to get involved in We Shall Overcome?

That depressing election result has seemingly kick-started a groundswell of opposition. Positive opposition. It feels like we’ve got our arses into gear again. It feels like we’re saying okay you have the governmental power but do you know what? We’re going to organise and collaborate and create and unite and resist as a cohesive movement. We’ll work outside of your strictures and create something massively inspiring and powerful and we’ll help each other and support each other and form a popular resistance to the state we are now lumbered with. We’ll be loud and determined and celebratory and we’ll have a laugh doing it but we won’t forget why we’re doing it and how powerful we can be when we all come together. We won’t be marginalised or trod on or quiet. We’re making a stand, getting involved and not giving up. We’re still angry and we want a better world.

Just how this whole WSO has taken off and exploded into an amazing coming together of people across the spectrum; it’s awesome in its power and potential and as a statement of intent for the situation we find ourselves in and the future. I’m overwhelmed by the camaraderie, the determination, the hope, the love, the power of the people being motivated to create something out of the ruins. This could be something; a network, a movement, a new cultural and social space, a new way of thinking and organising and creating. I’m inspired and motivated and optimistic.

Feeling a part of something that just could be massively significant, as though we are at the birth of something new and powerful and inclusive and culturally, politically and socially inspiring to those in opposition to the ridiculous system we currently labour under.

And performing on the same bill as Thee Faction, obviously. They are just wonderful and I love them with a passion.

Find out more about Interrobang?!