“I want to be involved in a bout of national catharsis, the collective scream of the doomed.” 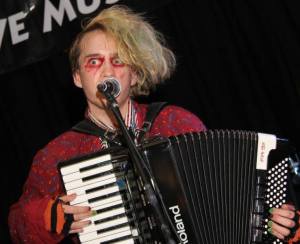 I play the electric accordion – loud, distorted, discordant squeezepunk. I tried playing the guitar – I wanted to learn three-chord punk, but only got as far as the second chord. In frustration, I picked up the accordion, thinking it would be easier. Seems it was. What’s more, it’s versatile – the accordion has buttons for bass, rhythm AND lead. Normally you need a separate guitar for each of those!

Politics. We live in a capitalist system fuelled by selfishness and greed. All of our major political parties support this system – and our current ruling party doesn’t just tolerate, but positively relishes, the most destructive, brutal and cruel excesses of it.  I may be cynical, but even if we don’t overcome I want to be involved in a bout of national catharsis, the collective scream of the doomed.

Resistance. The austerity movement isn’t just an economic policy, but an attempted cultural shift, an attempt to change who we are and how we think – to change what we consider acceptable, and what we aspire to. As long as we never change, those imposing it can never win.

A national shout of defiance. A unified declaration that we will not be beaten down.